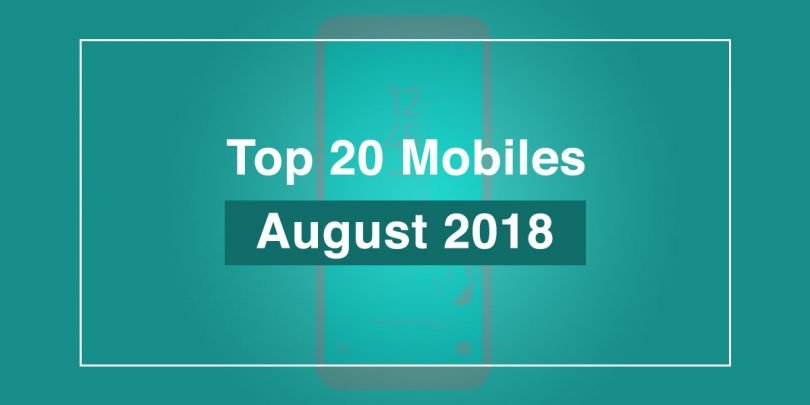 With the emergence of newer and newer smartphone manufacturers across the world, the number of smartphones getting released on a regular basis has seen an exponential increase. August/September is that time of the year when the smartphone world sees numerous new additions to its already huge arsenal of devices. All price brackets see numerous new faces so it isn’t easy to keep track of all of them to decide who trumps who as the better one. Don’t sweat it as PriceOye’s at your service and we have the top 20 mobile phones in Pakistan for August 2018 coming up!

Picking the best 5 wasn’t easy at all but there always had to be some winners and losers. At the top of the pile, like last month, is the Samsung Galaxy J6 primarily because of two simple reasons; performance and an affordable price. The Y7 Prime displaces last month’s first runner-up, the Oppo F7, and claims second place this time around with the aforementioned smartphone slipping to third. iPhone X falls to fourth this time around but maintains its position in the top 5 while the Huawei P20 Lite claims the final spot.

The top 20 mobile phones in Pakistan for August see different devices shuffle their way up and down the list. However, most of the smartphones from July have retained their positions due to being top-drawer already and the incoming competition in August wasn’t enough to topple.

Notable movements include the Galaxy S9 slipping a handful position towards the lower end of the table and the Huawei Y7 Prime 2018 jumping to second in the overall rankings from 10th. With an affordable price-tag roaming close to Rs. 17,000 and features that include 3GB RAM, 32GB internal storage, a 6.0 inches 720p display, and an aesthetically pleasing exterior, the reasons for the Y7 Prime 2018’s improvement are there for everyone to see.

The P20 Lite was one of the biggest movers towards the top, jumping 12 places to make it into the best 5 mobile phones of August 2018. The toned-down version of the bigger P20 and P20 Pro, the smartphone’s all-round prowess comprising of a notched 5.84 inches 1080p HD display, 4GB RAM + 32/64GB storage and powerful camera sensors is well documented.

Upon its release and for subsequent months, the specifications offered by the Mate 10 Lite in the price it commanded was unmatched. However, a plethora of smartphones in the last couple of months have managed to topple the smartphone to 9th position that was probably the epitome of value for money.

A large screen, good cameras and an adequate battery define this budget 2018 release from Samsung. If you’re low on budget and wouldn’t wanna budge from Samsung, the J4 with a price of Rs. 19,000 is an appealing option indeed.

Samsung has managed to maintain a stronghold when it comes to the top 20 smartphones of August 2018 due to a number of splendid releases. Huawei, whose launched a couple of exciting phones itself come August has managed a 30% share while Oppo, despite featuring the 3rd best August 2018 smartphone in the Oppo F7 contains only 3 entries. Last but not the least, Apple maintains its presence in the top 5 through the iPhone X.

It’s hard to put a pin on which type of smartphones dominated the top 20 mobile phones in Pakistan for August 2018. The list hosts a number of devices with altogether different characteristics and price ranges. However, excellent hardware and dual camera sensors are synonymous to most entrants. It’s also interesting to note that a lot of smartphones that were released months ago are still maintaining their status as top-drawer buys like the Galaxy Note8, Oppo F5 etc.