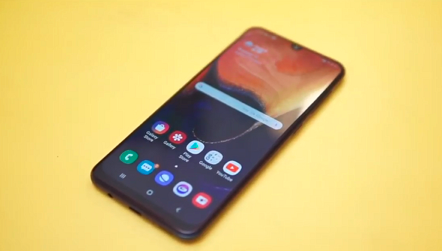 The world’s biggest manufacturer of smartphones, Samsung has recently launched the A50s. If we have to talk about Samsung A50 vs A50s, the device is known to be the much-updated version of the A50. It’s said to come with some cool specs and features that were missing in the previous model. Therefore, if you are scratching your head to know the key differences between these two phones then don’t you worry, because PriceOye is here to solve the case for you. Firstly, there are some great camera updates. Moreover, it comes with an extremely powerful chipset that will make your phone even faster and also has support for Samsung Pay. So, keep on reading to know more!

The newly launched Samsung A50s comes with a 6.5-inch display. Do you know what that means? Well, more screen space to play games on and watch videos because let’s face it, having a smaller screen phone kind of sucks, right? Moving on, with a 6.5-inch screen you get an AMOLED display that has a 1080 x 2340 pixels resolution and features a Corning Gorilla Glass 3. So, even if you throw that phone on the floor, there would be fewer chances of it breaking but it is highly advised that YOU DON’T! The pixel density of the A50s is 403 PPI. Long story short, if you compare both the phones; Samsung A50 vs A50s in terms of display and screen then you wouldn’t find many differences. Both phones have the same display and screen.

However, looking at the screen-to-body ratio of Samsung A50 vs A50s there are some minor differences. Having said that, it would be absolutely wrong to think that there were some defects in the screen of the A50 because let’s accept the fact that Samsung is one of those brands that will always be the big daddy when it comes to quality. No matter, whichever phone you pick starting from low range to even medium range variant, the quality of the display and screen of the Samsung phones will never disappoint you. The screen size of the A50s is a bit smaller than the Samsung A70 since that phone comes with a 6.7-inch screen. The body-to-screen ratio is 86% for A70 whereas for A50s it’s 85%.

Now here you will find a big difference! The Samsung A50 used to give support in terms of memory card for 512GB however, with the new A50s you can extend that storage to 1 terabyte! It is something quite cool because one of the major flaws in any of the phone is to have small storage. I mean in a world of too many memes and selfies, where would you save all your data? So, that is quite an amazing thing, which Samsung has done.

People who have used the A50 know how painful the fingerprint sensor was! It was almost like Samsung wasn’t prepared for that technology, but somehow integrated it into the smartphone just to be in that league. With the launch of the A50s, it was very much expected that some improvements be done on the fingerprint sensor.

I don’t know about you guys, but I surely look at the camera when I’m buying a new phone. Let’s accept it, what is the point of having a good phone when you couldn’t get some good pictures? Anyway, the biggest update in the A50s is the triple camera setup! Now you will be able to click some great pictures with your A50s. Main camera is 48MP f/2.0, the ultra-wide camera is of 8MP f/2.2 and then there is 5MP f/2.2 tap sensing camera available in the A50s. The selfie camera is 32MP that will help you to capture some bomb selfies! In terms of camera, the A50s is just like the A70 whereas it has some major differences if you compare it with the A50 as the main camera of the A50 is just 25MP with f/2.2 aperture.

Comparing the Samsung A50 and Samsung A50s there isn’t much changed or updated. Even when it comes to camera many phones that fall in the mid-price range have that sort of camera specifications, which the Samsung A50s carries. Now looking at the price point that is anywhere around Rs. 55,000 to Rs. 60,000 you wouldn’t call the A50s to be something out of this world. The Samsung A50 surely adds value to its cost, but A50s fails to do so. If you want to change your phone and get your hands on this series, then we would recommend buying an A50 instead of A50s.

Moreover, you can easily find other amazing smartphones on PriceOye at this price range, in fact, even at a lower price range. Go for a smartphone that gives you value for your money rather than just a brand name.